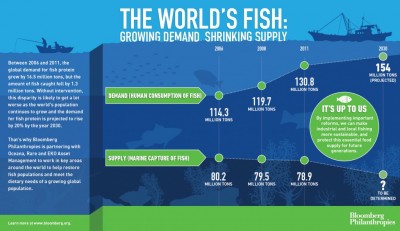 Billionaire Michael Bloomberg who just recently stepped down as Mayor of New York City seems to have a passion for fish. His Bloomberg Foundation has just announced one of the largest philanthropic gifts ever on behalf of ocean fish. The Bloomberg Vibrant Ocean Initiative will provide $53 million dollars to replenish and restore ocean fish around the world.

As populations of ocean fish have rapidly declined the human race has begun preparing for a world without wild fish. That’s the bad news. The good news is that many experts think restoring the oceans is actually possible—it’s just going to take some investment.

How much investment? While many would assert that we need to spend more than tens of millions of dollars. Bloomberg’s $53 million will produce a dramatic starting effect, which could convince the rest of the world to pony up even more funding to replenish and restore the oceans and its fish.

The Bloomberg project to “save the oceans and feed the world” is called the Vibrant Oceans Initiative. Over the next five years, Bloomberg Philanthropies is going to dole out $53 million to three organizations to fund specific fisheries reforms. A key component to the project is the business investment format wherein the EKO investment firm will design opportunities for investors to fund schemes that reward fishermen (and industrial fleets) for implementing changes, and earn shares of the returns that hopefully come about from those changes.

Antha Williams, who leads the foundation’s environmental programs, said that’s just Bloomberg’s style: “Once we’re persuaded that a strategy is going to be effective, we go in really big.”

Clearly we are delighted to see Mayor Bloomberg enter our world of ocean stewardship and take a commanding role with a focus on restoring ocean fish populations. Our work has already proven to be a spectacular success in restoring NE Pacific Salmon populations to all time historic highs as a result of our first project in 2012. We hope Mayor Bloomberg will track our continuing progress as IT JUST WORKS!

While over-fishing is surely a problem for ocean fish clearly the most critical problem they face is the dying of ocean pasture plankton blooms. Like Bloomberg our focus has been to prove an eco-investment model where smart motivated business can be “doing well by doing good.”