Browse: Home   /   The Fish Came Back To Historic Abundance 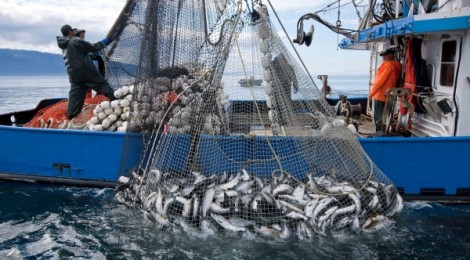 The Fish Came Back To Historic Abundance

THE FISH CAME BACK THE VERY NEXT DAY

The fish came back we thought they were a goner.

OK so the fish really came back this fall, a year following our 2012 ocean pasture restoration in the NE Pacific. The wonderful heartening news is they came back in tremendous numbers, more than in all of recorded history in many regions such as SE Alaska nearest to our ocean restoration project location.

Now it is being reported that everywhere from Alaska to the lower 48, baby salmon that swam out to sea, instead of mostly starving were treated to a feast on newly vibrant ocean pastures where once they could neither thrive nor survive. They grew and grew and before too long they swam back to our rivers a hundred million strong.

The SE Alaska Pink catch in the fall of 2013 was a stunning  226.3 million fish. This when a high number of 50 million fish were expected. Those extra ocean pasture fed fish came back because their pasture was enjoying the richest plankton blooms ever, thanks to me a 11 shipmates and our work in the summer of 2012. IT JUST WORKS.

As for who benefits from this how about the 60 million meals for American kids in USDA food aid programs.  Oh yeah it’s reported there are a lot of new pick-up trucks parked at the Alaskan community fish boat docks these days as well.

This is wonderful news for the planet. It’s means that by working with Mother Nature to undo the terrible wrong we have done by administering our deadly dose of CO2 – we and she have now shown we can re-purpose millions of tonnes of that deadly CO2 into becoming life itself. And the authoritative reports on whether it works, it’s not a few pundits preaching from academic pulpits, but rather hundreds of millions of salmon, each and every one swimming home to us with their carefully recorded lab journals, their very bodies, all reporting that in their world, their ocean pastures have come back to life. Read more on this blog about our ocean pasture restoration and how saving the worlds oceans needs just 100 villages not 100 nations to do the work..http://russgeorge.net/2013/04/28/a-call-to-100-villages/

Want to learn all about this work without engaging the analytical side of your brain… watch and listen to our musical stage show…http://russgeorge.net/2013/10/10/new-musical-stage-show-40-million/ If the low number expected at 25 million is all we see it will still be one the 6 largest returns in all of history. http://russgeorge.net/2014/03/09/fraser-river-sockeye-expected-return-time-high-numbers/

The best news of all is that these same results can be achieved immediately and affordably by replenishing and restoring ocean salmon pastures critical to all of the West Coast salmon including the Columbia. For just 1% of what is spent on Columbia River salmon management we can Bring The Fish Back to historic high numbers.

You can help as simply as helping share this news with others either through email or just clicking on the SHARE links below and using social media.